What Is Breast Cancer and What Are The Risk Factors?

Breast cancer is a disease in which abnormal breast cells grow and divide uncontrollably compared to healthy cells. According to the Central Disease Center (CDC), breast cancer is the second most commonly diagnosed cancer in women in the United States. In addition, 12.4% of women will develop the disease in her lifetime. Early detection and advancement in treatment options have increased survival rates to 90%. 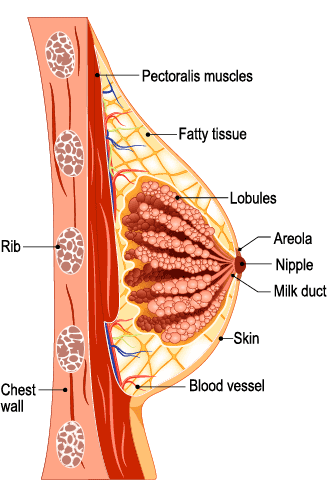 Anatomy of the Breast

The breast tissue is comprised of fat cells called adipose tissue. These fat cells span from the collarbone, underarm and across the ribcage. Breast cancer can develop in the three main parts of the breast: milk producing lobules, ducts that carry milk to the nipple or the fibrous connective tissue that provide support for the breast.

If the abnormal cells travel to other areas of the body where they are not normally found it is referred to as metastatic breast cancer. The cancerous cells spread through the blood stream or through the lymph system which is part of the immune system.


Who is at Risk of Developing Breast Cancer?

Since some women with breast cancer do not experience symptoms, screening is still the best defense for early detection. Women who are between 40 and 54, should get a yearly mammogram. Methodist Health System invites you to schedule your mammogram today.

Does genetics increase your risk of developing...

October 10, 2019
Did you know genetic mutations may increase your risk of developing cancer? Read our blog to determine if you have these genetic risk factors...
Previous Post
Back to blog home

Could your persistent cough be walking pneumonia?

Do you need to see an electrophysiologist?

Could I have an ulcer and not know it?

The importance of well-woman visits