Gary had a 30% chance of survival - only one hospital would treat him.

Gary Thompson (33) does not remember much after fainting in his bathroom on May 28, 2020. After weeks of trying to overcome some upper respiratory symptoms, what was thought to be bronchitis ended up traveling to Gary’s heart causing many of his organs to fail.

Early March, Gary’s daughter was fighting a common cold that eventually spread to the entire family. A test assured them that it was not COVID-19, though Gary could not shake the infection his body was fighting. Initially he was treated with antibiotics to combat the virus. When his health worsened, Gary went back to the area med clinic for another evaluation. He was treated a second time with antibiotics and was told to rest. After several weeks, Gary’s health took a turn for the worse.

Gary awoke in the middle of the night, walked into his restroom, and suddenly everything started moving. It was not long after dizziness overcame him that he hit the wall, collapsed to the floor, and lost consciousness. His wife, Pamela, heard him hit the floor and immediately came running. “My heart was racing, I was so scared,” Pamela vividly recalls. She called an ambulance while she tried to wake her husband up. “He was staring at me with a blank expression. I just remember looking at him, yelling for him to wake up.” A loud yell and clap finally brought him to consciousness.

By the time EMS arrived, Gary felt fine and attributed his collapse to dehydration. “It’s kind of shocking,” Gary said. “I woke up from fainting and felt fine.” Though paramedics left it up to him to be transported to an area hospital for further evaluation, Pamela knew something was not right with her husband and that he needed medical help. “He has never fainted before, and I knew something was not okay. The look I gave them [paramedics] pleaded for help to save my husband.” She stated. “I’m glad I did because it saved his life.”

Gary was transported to Southwest General Hospital in San Antonio, Texas where he progressively became short of breath and his oxygen levels were low. He was placed on intubation and mechanical ventilation. His condition was much more serious than they thought. An echocardiogram showed a wide-open aortic valve insufficiency and aortic root abscess. Gary had an infection, which was destroying his heart valve, causing the organ to not properly close. Rather than pumping blood outward, his heart was flowing flood backwards. This put stress on his heart to pump harder, which over time lead to heart failure. His condition further deteriorated to a point where he was experiencing liver and kidney failure.

“The doctors were telling me to say goodbye and that Gary wasn’t going to make it through the night,” Pamela remembers. The next morning Pamela received an urgent call from the hospital encouraging her to rush over as her husband had coded and they were performing CPR. They managed to resuscitate and stabilize him.

Gary’s physician desperately sought area hospitals for him to transfer to for advanced medical treatment. “The only possible chance was finding a doctor willing to do it with such a low survival rate,” Pamela recalls. Having only a 30% chance at survival, the only health care system to agree to the transfer was Methodist Hospital under the care of Heart Failure Surgeon, Masahiro Ono and Aortic Surgeon, Kim de la Cruz. 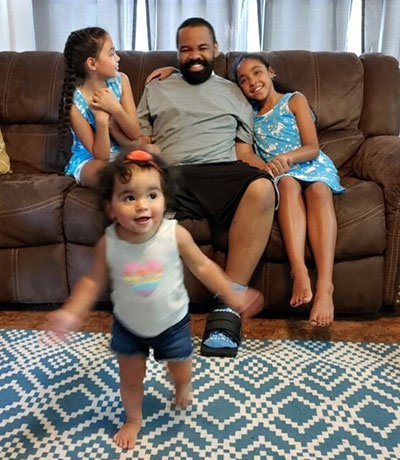 “From the moment Mr. Thompson was accepted to transfer, wheels were set in motion to coordinate his complex care,” de la Cruz commented. “Communication between the different services involved in his care and established protocols strengthened by training and extensive education made Gary’s transition of care seamless.”

On arrival, the Advanced Heart Failure team used a transthoracic echo (TTE) test to diagnose Gary’s heart and blood vessel condition. Due to his aortic valve insufficiency and aortic root abscess, it was determined that extracorporeal membrane oxygenation (ECMO) life support would not be beneficial without definitive surgery. Gary faced a 100% mortality rate without surgery; chances of him surviving with surgery were only 30%.

Dr. de la Cruz performed an aortic root reconstruction and root replacement. This entailed removing a section of Gary’s aorta, his aortic valve, and a portion of the heart where the valve is attached. The section of his aorta was replaced with an artificial tube and his aortic valve was replaced with a tissue valve. Gary came out of surgery after seven hours with an open chest to allow room for the swelling of the heart, a common procedural practice in this type of extensive heart reconstruction. He was placed on ECMO, which offered cardiac support as his heart was too weak to pump enough blood to his vital organs. Infectious disease experts attentively monitored his antibiotics for the infection of the aortic root.

A day later, Dr. Ono implanted an intra-aortic balloon pump, a long, skinny balloon that controls the flow of blood through the aorta. The device gets smaller when the heart pumps allowing blood to flow through the rest of the body. It enlarges when the heart relaxes to keep more blood in the heart. This helps the heart function and subsides the swelling that occurs after this type of complex operation. Dr. Ono was able to close Gary’s chest up the following day. Gary responded well to the surgeries and was able to wean off ECMO after four days.

“All I could think about was my wife and kids and getting home,” Gary commented. “It got me through. I did not want this to be the end. I kept thinking to myself, this can’t be the end, I have to get out of here.”

Although Gary’s outcome was far from certain, Methodist Hospital is unique in that it offers true interdisciplinary consultation amongst some truly world-class subspecialties. “It’s not simply that we have the capability to offer complex aortic and valvular surgeries, but that we can do anything in-between, tailoring the individual therapies offered to the patient in front of us, as one size never fits all,” stated Michael Kwan, Cardiologist with the Methodist Advanced Heart Failure and Transplant Clinic. “This multiplicity of technologies available at Methodist allowed us to not only determine the best form of support for Mr. Thompson going in to surgery, but also the best mix of technologies to wean him back down to recovery after surgery.”

After several weeks of recovery and rehabilitation, it was determined that Gary had a strep throat infection that spread to his heart, otherwise referred to as endocarditis. The infection caused destruction to the aortic root and valve, which lead to heart, kidney, and liver failure. The antibiotics prescribed for his cough in March were ultimately disguising his life-threatening condition.

Dr. de la Cruz said patients with predisposing heart valve conditions, like a congenitally abnormal heart valve or a heart murmur, are more susceptible to valve infection, the most common sources of infection derives from the mouth or the intestines. “Bacteria from these sources are somehow translocated to the bloodstream when the body’s immune system goes down and they lodge into an area of least resistance,” he commented. “In Gary’s case, he had a defective heart valve, ultimately the cause of infection and destruction to his valve.”

Gary Thompson is alive today because of the multidisciplinary approach taken to treat his complex heart condition. “Considering Gary’s condition when he got to us and the fact that he is alive and well today and off dialysis is a miracle to me,” said de la Cruz. “Patients who present with complex heart problems like Gary have only one shot at getting better. The delivery of care must be perfect and the level of attention to detail cannot be overemphasized. These patients cannot take another ‘hit,’ otherwise, the outcomes will not be the same. Through our multidisciplinary and collaborative teams at Methodist Hospital, we are ready and able to deliver the highest level of cardio-aortic surgical care for morbidly-ill patients like Gary.”

Since his care at Methodist Hospital, Gary and his wife share a new perspective on life. “You can’t get back time or make more of it. Take every day and enjoy the moments. It sounds cliché, but it’s absolutely true,” Gary said. “My time was technically up. To get a second chance is incredible. I no longer think about tomorrow, I live in the now. You don’t know how much time you have.”