Welcoming a new baby into the world is one of the most beautiful moments a woman experiences in her life. What was supposed to be a happy time quickly turned into a severely life-threatening situation for Cathi Aguilera, who was 29 weeks pregnant when she was diagnosed with COVID-19 and required life-support to survive.

Due to her pregnancy, Cathi was at a greater risk of developing severe COVID-19 respiratory complications. Her illness advanced rapidly; her lungs had filled with fluid and the effects of the dangerous virus caused them to fail. She was admitted into the Lung Rescue ICU (LRICU) at Methodist Hospital, a unit designated to the most critically ill COVID-19 patients.

“She got very sick, very fast,” commented Tiffany Satterfield, MD, Cathi’s OB/GYN. Initially, Dr. Satterfield had arranged to perform a preterm cesarean section (C-section) just days after being admitted; however, those plans changed when she received an unexpected phone call. “She’s crashing, she needs to be delivered right away.” By the time Dr. Satterfield arrived at the hospital, it was evident that Cathi was struggling to breathe and she was not saturating oxygen well. Cathi’s depletion of oxygen had endangered both Cathi’s life and her baby’s.

Cathi was intubated on a ventilator when her oxygen levels progressively dropped below 60 percent. “Every minute she was like that, Cathi and her baby’s lives were more and more at risk,” commented Jeff DellaVolpe, MD, critical care physician on the LRICU. Dr. DellaVolpe needed to immediately cannulate Cathi and get her on ECMO, a form of life-support that replaces the function of the lungs and heart for patients with life-threatening illnesses. Cathi’s condition was near-fatal, and the teams feared she may not pull through.

“There were a lot of people in the room, so many doctors waiting to work on me. Everything was going on at once,” Cathi recalls. The last thing she remembers about the day she nearly died was hearing, “We’re going to need blood.” Then, everything faded out and she woke five weeks later.

Simultaneously, the OB anesthesia, neonatal, lung rescue, and ECMO teams worked tirelessly to ensure the first-time mom would live to meet her baby girl. In its rarity, Dr. Satterfield emergently performed a C-section in the LRICU, while Dr. DellaVolpe worked to cannulate Cathi for ECMO.

She remained on ECMO for nearly three months. Her lung function marginally improved, and she was in a sedated coma for several weeks. She remained on life-support and was on dialysis to support her kidneys which had failed. Cathi fell ill to depression, common for patients who have prolonged hospital stays. Her care team recognized a decline in her mental health and her will to fight had been exhausted.

Cathi’s care team knew she would not recover in the absence of motivation. The lung rescue team worked together with the NICU team so that Cathi could meet her baby girl.

“It was a hard decision to make, to bring this frail baby to her mom on the lung rescue ICU,” commented Dr. Satterfield. Every safety measure was met to ensure both mom and baby could meet.

Cathi met her baby girl five weeks after she delivered.

“That was the turning point for Cathi. When she saw that baby, she was fighting for it every step of the way,” said Dr. Satterfield. “It was such an amazing turnaround for her. It’s truly unbelievable the difference that made to see her daughter.”

Cathi’s care team on the LRICU hung photos of baby Raya all around her room in hopes they would keep her motivated to fight through her terrible illness.

“There were days that were just so bad and painful. You just think, ‘Is this how it’s going to be forever?’” Cathi recalls. “In my heart and mind, I know that seeing my baby gave me the will to keep going. This is why I have to continue to fight so hard.”

To this day, Cathi has a special place in her heart for everyone who worked to save her life. “They put so much into my care because I shouldn’t be here. They fought as hard as I did. I made an impact on them as much as they did on me. They fought with me.”

Because she was admitted before her family and friends could host a baby shower, her care team came together to throw a beautiful baby shower for Cathi, inclusive of cake, flowers, and gifts.

Cathi and baby Raya are comfortably back home. “The fact that they’re both alive is the grace of God,” Dr. Satterfield said. “It’s the love of being a mother that got her through this.” 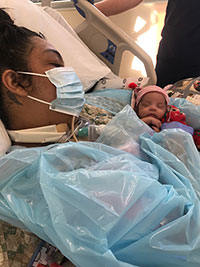 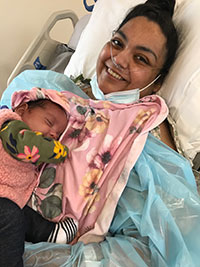 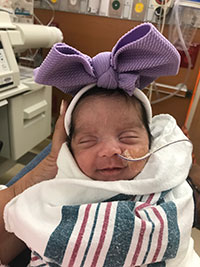