San Antionio, TX – Methodist Hospital is first in South Texas to perform a robotic-assisted esophagectomy, one of the most advanced surgeries a thoracic surgeon can perform. This surgery removes part or all of the esophagus, a long, hollow tube that runs from the throat to the stomach and helps move food through the digestive tract. An esophagectomy is often performed on patients with esophageal cancer, a cancer type that may not show symptoms in its early stages and persists as one of the most common causes of cancer-related deaths in America.

Alfred Lozano (70) lives an active lifestyle. His routine morning exercise and hobby of refinishing antiques keeps him busy. Alfred recalls a period of time where he felt exhausted and was experiencing severe pain and bloating in his abdomen. He remembers abnormalities in his reflux, such as burning and regurgitation. He attributed the discomfort to his diabetes and made an appointment with his doctor. Alfred’s blood work revealed low iron counts, causing his doctor concern for loss of blood. 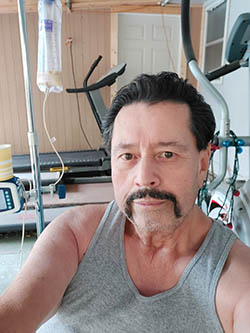 Alfred was referred for an endoscopy, a procedure which involves inserting a long, flexible tube (endoscope) with a tiny camera down the throat into the esophagus; this allows a physician to examine the esophagus, stomach and the beginning of the small intestine. Alfred’s physician identified two tumors on his esophagus that were later diagnosed as Stage 1B esophageal cancer.

Duy C. Nguyen, MD, thoracic surgeon, performed a robotic-assisted esophagectomy on Alfred, a first of its kind in the South Texas region. During traditional open-chest surgery, a surgeon makes an incision from the patient’s breastbone to their bellybutton, removes the esophagus and reconstructs a pathway for food using a portion of the patient’s stomach or large intestine. The benefits of performing robotic-assisted surgery allows the surgeon to make a small incision on the right side of the chest and another in the abdomen. The robot enables the surgeon to achieve better visibility with a magnified 3D high-definition vision system and offers more control and precision with a range of motion superior to that of a human hand.

“The oncologic goals of robotic minimally invasive esophagectomy are the same as an open esophagectomy,” commented Dr. Nguyen. “I am able to mobilize the esophagus, do a complete lymph node dissection, and create a new esophagus while using sound surgical technique. Though we are using smaller incisions and instruments, this is still major surgery, and we don’t take any shortcuts because outcomes depend on attention to detail.”

A minimally invasive, robotic surgical approach not only benefits the surgeon but also the patient. Dr. Nguyen says, “Being able to offer patients a minimally invasive surgical option for esophageal cancer means that patients can recover faster and return to normal lives in a shorter period of time compared to traditional approaches. Not only is recovery time reduced, but postoperative pain is also less.”

With traditional esophagectomies, patients have a hospital stay up to two weeks. Alfred returned home after only six days in the hospital and has since been doing well and getting back to life. “Taking a procedure that was once high in complications with prolonged recovery to a minimally invasive one where patients can go home in a week and eat food in a month gives us the most pride, as we are fighting cancer while preserving quality of life,” stated Dr. Nguyen.

Alfred was an ideal candidate for this procedure because he was diagnosed at an early stage and had the motivation to do everything possible to fight his cancer. “Being 70 years old and diabetic did not limit my consideration for his surgery,” said Dr. Nguyen. “Alfred underwent a thorough evaluation with a multidisciplinary team of oncologists, pulmonologists, radiologists, and surgeons to assess his candidacy, along with tests to make sure that we could accurately assess his risks for the operation.”

Methodist Hospital is the only program in South Texas that offers a completely robotic minimally invasive esophagectomy. This alleviates the burden of time and cost of travel for patients in the San Antonio region. “This procedure is definitely changing the way we look at esophageal cancer,” said Dr. Nguyen.

Alfred is recovering well and slowly getting back to his routine. He says he is blessed to have access to advanced surgical options and is fortunate to have avoided chemotherapy and radiation for his cancer. “It’s a blessing to have doctors like them who saved my life. Seventy is just a number; I’m still in good health and living life,” Alfred recalls.

“He [Alfred] has been a rock star in his recovery and serves as an example of the amazing results we are able to achieve in South Texas,” commented Dr. Nguyen.