Could I have an ulcer and not know it? 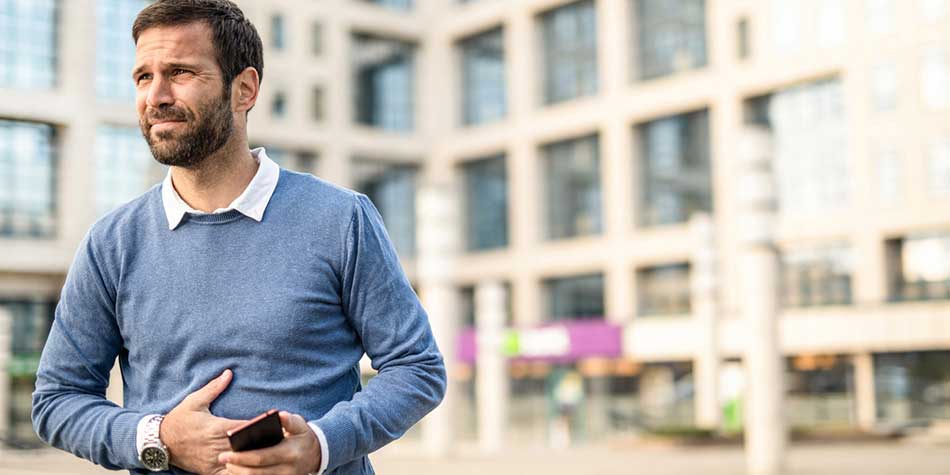 Around 25 million people will have a stomach ulcer in their lifetime, according to the Centers for Disease Control and Prevention. Despite their prevalence, the symptoms of an ulcer can frequently be mistaken for other conditions, like heartburn—and some people may not show any signs at all. It’s also unlikely that stress or your diet is the culprit. If you’re concerned that your stomach pain could be something more serious, read on to find out the causes, proper treatment and prevention methods for peptic ulcers.

Peptic ulcers are open sores that occur when acids that help digest food damage the lining of the stomach (gastric ulcer) or the first part of your small intestine, known as the duodenum (duodenal ulcer). Normally a thick layer of mucus protects this lining from the effects of digestive juices, but many things can reduce this protective layer.

The most common cause of peptic ulcers is a bacterial infection with Helicobacter pylori (H. pylori). As much as half the population is infected with H. pylori, but for most people, it causes no symptoms. In a small subset, however, it can cause inflammation in the stomach lining. Over time this can lead to complications like peptic ulcers.

A second, less common cause, albeit one that’s steadily increasing, is the overuse of NSAIDs, such as aspirin and ibuprofen. Taking these pain relievers for the occasional headache or bout of arthritis won’t cause a peptic ulcer, but the risk increases for people who take them frequently. NSAIDs can cause ulcers by reducing the ability of your stomach lining to protect itself from gastric acids.

There is some evidence that stress, anxiety or depression can contribute to the development of ulcers or impair healing. However, the relationship between stress and ulcers isn’t completely clear, with more research needed on the topic.

What about food? Despite what you might have heard, there are no convincing data that specific foods, beverages or spices cause peptic ulcers. Smoking and drinking alcohol also don’t cause ulcers on their own, but they may increase the risk among people who take NSAIDs or have H. pylori. They also may worsen existing ulcers or prevent healing.

Peptic ulcers can cause burning or dull pain in the stomach or upper abdomen. It can also present as a gnawing pain when your stomach is empty. Other symptoms include feeling full after eating, bloating, belching, nausea or vomiting, heartburn, poor appetite or weight loss. Generally, stomach ulcers will get worse after eating when digestive acids are secreted.

Duodenal ulcers, on the other hand, often get better after eating. That’s because eating stimulates release of bicarbonate in the small bowel, where duodenal ulcers are located, neutralizing stomach acid. Pain may then occur two to five hours after eating, especially after dinner when there are often hours between meals.

With either type of ulcer, symptoms can last for minutes to hours and often come and go for several days or weeks. However, there is a chance you may not experience any of the signs. Nearly three-quarters of people with peptic ulcers don't have symptoms and only become aware of their condition when complications arise or as the ulcer worsens. Older adults and those who take NSAIDs are more likely to be asymptomatic and later present with ulcer complications.

In more severe cases, ulcers may bleed or extend deep into the wall of the stomach or intestine. They can also cause a perforation, a hole or puncture in the stomach or duodenum, which can happen without bleeding. A perforation or bleeding ulcer can be life threatening. If you experience any of the following symptoms, get emergency medical help immediately:

There are steps you can take to help avoid getting an ulcer:

When to see a doctor

Peptic ulcers will get worse if they’re not treated, so contact your doctor if you have symptoms or any signs that you could have one. Unfortunately, a lot of the time the way people find out they have an ulcer is by developing bleeding.

Your doctor may be able to diagnose a peptic ulcer by talking with you about your symptoms. Be sure to disclose the frequency of NSAID use.

However, some tests are usually used to confirm the diagnosis. For instance, to see if you have an H. pylori infection, your doctor will test your blood, breath or stool. They may also look inside your stomach and duodenum by doing an endoscopy or X-ray. An endoscopy is a procedure where a lighted tube is inserted through the throat and into the stomach to check for abnormalities.

If you test positive for H. pylori, treatment to clear the bacteria includes a minimum of two antibiotics and acid-suppression medication. Once it’s found, H. pylori has to be eradicated. Besides causing ulcers, the bacteria can lead to stomach cancer in some people. Your doctor may also recommend taking a protein pump inhibitor or a histamine receptor blocker to suppress the acid in your stomach. You’re attacking it from two different directions. By stopping the irritant and reducing the acid, you give the ulcer the chance to heal.

Ulcers caused by taking NSAIDs or other medication should begin healing almost immediately after you stop taking the drug.

Finally, don’t be fooled if you start feeling better without treatment. An ulcer may temporarily heal without antibiotics, but it’s not uncommon for it to recur or for another to form nearby if the bacteria aren’t killed. Follow your doctor’s recommendations regarding the treatment that would work best for you.

An ulcer could be a symptom of something worse. Our ER care team is here to care for you when you need it.

June 27, 2020 by Laura Breeden
June is PTSD Awareness Month. Post-traumatic stress disorder (PTSD) is a type of anxiety disorder, which you may develop after being involved...
Previous Post

June 18, 2020 by Laura Breeden
June is not only the month for celebrating dad, but also men's health: did you know dad is less likely to go to the doctor regularly?
Next Post
Back to blog home

Is it cold, flu, COVID-19 or something else?

The COVID-19 Vaccine and Breastfeeding: What we know now

How Having a Pet Can Help Your Mental Health