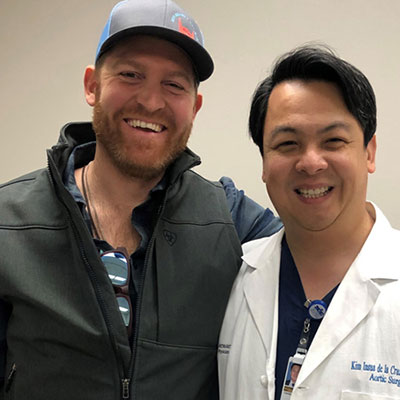 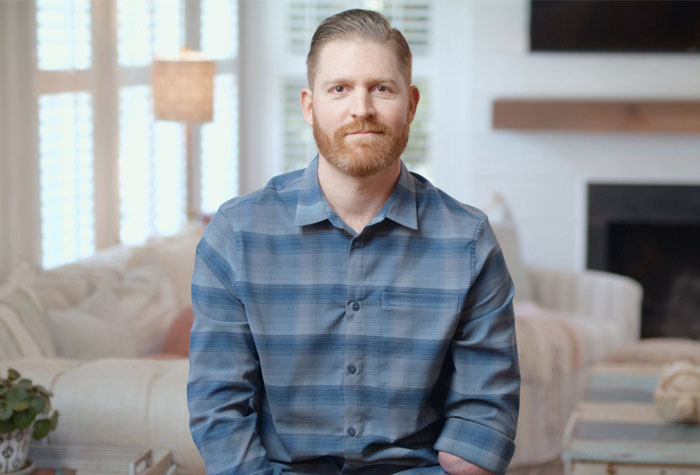 Upon completion of boot camp, Aaron underwent cardiovascular testing where an ECHO cardiogram, ultrasound and stress test were conducted on his heart. Not having experienced any health problems and feeling like he was in the best shape of his life, Aaron’s EKG results showed an abnormal heartbeat. Although cleared to begin SEAL training, he would be regularly tested for his heart throughout his career.

In 2014, Aaron was stationed on the East Coast of the United States near Virginia Beach. During an annual health physical, an EKG revealed Aaron had a leaky heart valve, which causes blood to leak backwards through the valve after the heart squeezes and pumps blood forward. His physician at the time did not show much concern and ultimately believed that Aaron would not be hindered by his newly found condition.

Aaron and his wife, Mindy were transferred to San Diego a few years later and introduced a new baby girl, Dylan, to the world. At this time in his career, he became a sky diving instructor for the West Coast SEALS. While he neared the end of his military service and looked forward to a 2017 retirement, Aaron never looked back on his leaky valve diagnoses.

In November 2017, a hunting trip brought Aaron out to Texas where an unfortunate vehicle accident led to the amputation of his arm. He was rushed to Brook Army Medical Center where he was admitted for three weeks. Mindy was by his side before he even woke up.

Aaron was granted permission to stay on temporary orders to finish out his rehab assignment at the Center for the Intrepid, one of few Centers of Excellence in the nation to treat amputees and burn victims. Meanwhile, his family decided to make San Antonio their temporary home, unsure of how long they would reside in “Military City”, USA.

In May 2019, Aaron was medically retired from the military. During the motions of medical out processing, he sought out a primary care physician at the Veterans Affairs who, not to his surprise, told him he had an abnormal EKG. After disclosing his prior leaky valve diagnoses, she advised he get a CT scan for further evaluation. Aaron and his wife were shocked when they were told he had an aneurysm and that the likelihood of it rupturing was at high odds. An aneurysm measuring 5.5 centimeters is considered very dangerous; at just 35 years old, Aaron’s aneurysm measured 5.3 centimeters.

Feeling anxious, afraid, and uncertain, Aaron was encouraged to seek a surgeon immediately. Within days, he found himself in the office of the Methodist Hospital Aortic Center to meet aorta specialist, Kim de la Cruz, MD.

After meeting with de la Cruz, Aaron and his wife knew they were in good hands.

“This is the right place and this is where we want to be. We got lucky it was in San Antonio,” commented Aaron. “The biggest thing to me is trust. The scariest part is releasing trust to someone I don’t know. I trusted I was in good hands.”

De la Cruz had a full CT scan done on Aaron’s aorta, and later that afternoon they sat down with the aortic physician to review the results. The 3D imaging showed Aaron’s aorta to be 5.7 centimeters and even 5.8 centimeters in certain areas. Surgery was needed immediately.

“Going from being in great shape to finding out you need aortic surgery - it was shocking,” commented Aaron. “I thought, is this real?”

According to de la Cruz, Aaron was facing a life-threatening illness. “If untreated, Aaron could have suffered a heart attack, acute aortic valve insufficiency, heart failure, pulmonary edema, stroke, tamponade, or even death.”

Aaron underwent a valve sparing aortic root replacement procedure, also known as the David Procedure, on December 3, 2019. Having gone his whole medical career facing many obstacles and challenges and providing brave leadership, it was Aaron’s turn to trust his life in de la Cruz’ hands.

“We’re going into battle together. I want you on your game,” stated Aaron to de la Cruz prior to going into operation.

Aaron had a highly specialized operation done, one of which few specialists in the nation are capable of performing. First the portion of the aorta closest to the heart (the aortic root) is repaired, while preserving the aortic valve. Then de la Cruz kept Aaron’s aortic valve and reconnected it to a new section of aortic tissue. By preserving the native aortic valve, Aaron avoids the need for lifelong anticoagulation therapy.

Since surgery, Aaron has been doing great and is slowly getting back to good health.

“I feel extremely lucky. I don’t know what the outcomes would have been… I think it could have been very bad down the line,” said Aaron. “I’m beyond thankful for everyone throughout the chain, from the Veterans Affairs to Dr. de la Cruz’ office. He saved my life.”