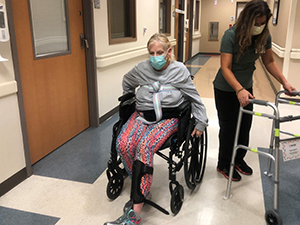 A serious infection caused Gwyn Gist to fall and damage her spinal cord. She was paralyzed from the neck down. After several surgeries and hard work in rehabilitation, she’s now walking on her own and talking a mile a minute. Gist, who goes by Gwynnie, contracted an infection after having lower back surgery near her home in Thornton, Texas. That infection spread up her spinal cord and caused increasing weakness in her body. In February, she lost her balance and fell.

“I fell and smashed my head on the way down. After nearly four hours, my neighbors came to check on me and found me lying in a pool of blood,” said Gwyn “Gwynnie” Gist, a patient at Methodist Hospital | Texsan. “I woke up paralyzed. It’s really a miracle that I even survived.”

Gist was taken to a nearby hospital, but the medical team there determined she needed specialized care and called Dr. Christopher Chaput, the Medical Director of the Spine Center at Methodist Hospital | Texsan. He said he thought they could help, so an ambulance crew rushed Gist to San Antonio.

Dr. Chaput assembled the teams needed to figure out what was happening to her. He knew they needed to act fast if she was going to have any chance of using her arms and legs again.

“From that initial call, I knew she would likely need to be intubated and stay in the ICU for a while. You need a high-level of care for that type of injury,” said Dr. Chaput. “And if she were to regain movement in her limbs, she would need an excellent rehab team, which we have in house at Texsan.”

Imaging revealed that Gist had compression of her spinal cord from a combination of pre-existing bone spurs and the infection that had spread from her original surgery in her lower back.

“The weakness had continued to progress rapidly to the point that when she arrived, she could barely flick one arm. That’s all,” said Dr. Chaput.

The surgical team removed a bone in her neck to make room for the spinal cord, and then removed the infection.

“I had to remove so much bone from the front of the neck, that I had to go to through the back of the neck to do a belt and suspenders surgery. It was an extensive procedure,” said Dr. Chaput. “Her case was so complicated due to the compression and the infection. If we were going to get her the best chance of recovery, I needed to be aggressive in this emergency. That was really her only hope of survival.”

Without the quick action of the team, Dr. Chaput says Gist would have been permanently paralyzed and the infection could have spread up the spinal canal to her brain. After surgery, Gist immediately began to recover strength in her arms and legs. From the ICU, she was moved to the rehab unit at Methodist Hospital | Texsan to re-learn how to use her arms and legs.

“I’ve spent two and half months at Methodist Hospital | Texsan,” said Gist, walking down the hall with a walker and physical therapist by her side. “This is how far they brought me. It’s amazing. I couldn’t walk or talk when I got here. Now, I feel like I could run, but they wouldn’t let me.”

She credits the amazing surgeons, physicians, nurses and rehab team for her incredible recovery.

“It’s all because of Dr. Chaput and the team in this hospital. Everyone is so wonderful that it’s almost hard to leave,” said Gist. “But I’m going to get to walking better, and I’m going to come back and walk in the front door. And I’m going to say “Yo! Look who’s here!”

Gist’s laugh filled the room. She was overjoyed that she made it through such a scary ordeal. She’s now home and continuing her recovery.

Methodist Hospital | Texsan is recognized by The Joint Commission with the Gold Seal of Approval® for spine surgery and quality patient care. To learn more about the Spine Center, click here.