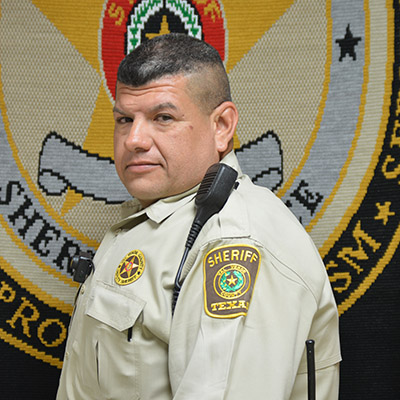 San Antonio, TX — Mike Cardenas, 48, was on duty when a car unexpectedly collided with his. Cardenas is a Patrol Deputy for Val Verde County Sheriff's Office, and he was responding to a call when another car failed to stop at an intersection. "It happened fast but the mind doesn't have the ability to catch up with the scene, so it's almost like slow motion," said Cardenas. "I can see the vehicle coming from one side. There was a first impact, and a second, and then a third."

Help quickly arrived, including the sheriff and many of his fellow deputies. They asked Cardenas to move a little, and because of the adrenaline and shock, he confidently responded "sure!" He tried to exit the vehicle, but quickly realized he could not move the right side of his body. He also did not know there was damage to his left leg. "They told me to stand up and I stepped onto my left foot, but it gave out because it was broken," Cardenas recited. The first responders realized the injuries were extreme, so they took him to the local hospital. "Reality started setting in and adrenaline started dropping," said Cardenas. 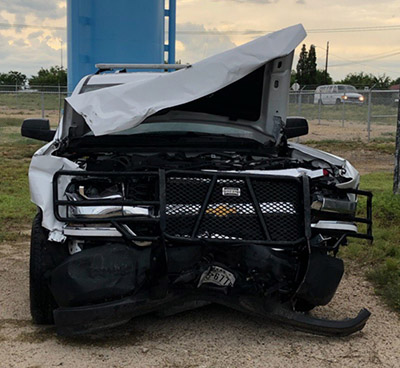 After a few hours at the local hospital, they realized the magnitude of his injuries and decided to airlift Cardenas to Methodist Hospital | Stone Oak, where he received immediate care. "From the time the helicopter landed and the time it took to reduce his hip was 15 to 20 minutes," said Dr. Richard Barber, orthopedic trauma surgeon. "Even after working at other places, that was impressive for everyone to be there and for us to get that taken care of in that amount of time." The longer the blood supply is cut off to the hip, the more at risk the bone tissue is of dying – also known as avascular necrosis (AVN). That is why their timeliness was so crucial.

Cardenas had other injuries as well, including broken left ribs, upper spinal injuries, a detached retina and an acetabular fracture dislocation. The acetabulum is the socket side of the hip joint. His socket was broken and his hip was dislocated. The following day, he went into reconstructive surgery. Four days after that, Cardenas graduated to therapy. "I thought about doing it back home, but I thought staying and doing rehab here was the best thing for me," he said.

"The care that I was given was like having your own private doctors, your own private rooms, your own private RNs," Cardenas shared. "They actually took care of me. I felt like a celebrity having my own things and felt very comfortable. I just wanted the therapy here." He went through occupational and physical therapy. He relearned how to do daily activities such as showering and brushing his teeth. "It's very hard as a guy, a cop and a former marine to have someone retrain you on these things," Cardenas admitted. "I was only 48 years old. I understand if I was older, but being 48 and independent, that was very hard to swallow."

Understandably, this was an emotional journey. Cardenas shared how his therapists always took their time and would comfort him. "For the next hour or two, I'm with you. Whatever pain you're going through, I'm here to go through it with you. They weren't distracted," he said. "They actually helped me get my life back. I almost didn't even want to leave."

"Everybody from the OR [operating room] coming in on the weekends to the trauma team to the rehab team worked hard to get him back on his feet," said Dr. Barber. "Trauma is a team sport. It takes a team to get patients like Cardenas back to his state."

On December 11, Cardenas returned to work as a Patrol Deputy for the first time in a year and a half. "It felt great to put my uniform back on and get inside a unit," he said. "Although I still have some weak areas, I am so motivated and so thankful that I have gotten the care I was given at your hospital."

Methodist Hospital | Stone Oak has significantly invested in its trauma and rehabilitation programs to provide exceptional and comprehensive care to patients like Cardenas. As a result of its impressive advancements, the Texas Department of State Health Services recently designated the hospital's trauma program as a first-time Level III Advanced Trauma Center. The hospital also expanded its rehabilitation services and opened a new freestanding rehabilitation center in 2020. Methodist Hospital | Stone Oak is readily equipped to treat a wide range of traumatic injuries.